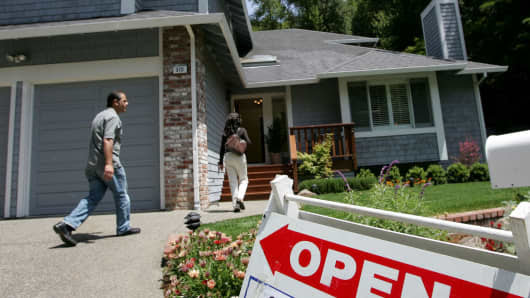 Real estate agents arrive at a brokers tour showing a house for sale with a list price of $1.3 million May 17, 2007 in San Rafael, California.

The supply of homes for sale is finally rising, but fewer buyers are able to afford these homes. That could result in a much slower spring market.

The supply of homes for sale is finally rising, but fewer buyers are able to afford these homes. That could result in a much slower spring market.

Spring is usually the high season for housing, but high home prices have been taking their toll for months. The numbers point to potential trouble ahead.

The median price of a home listed in February jumped 7 percent annually to $294,800, according to Realtor.com. The price increase came as the number of listings rose 6 percent, with an additional 73,000 listings compared with a year ago.

Buyers did come back in January, with signed contracts jumping a wider-than-expected 4.6 percent month to month, according to the National Association of Realtors. Most point squarely to the drop in mortgage rates that occurred in December as the cause for the rebound. Gains were strongest in the South, where prices are relatively low, and weakest in the West, where they are highest.

Volume nationally, however, was still lower than in January of last year.

"That's a sign that while housing is going to pick up from late 2018's sluggish level, which we expected given lower mortgage rates, it's still at a slower pace than we what saw in early 2018. Affordability continues to be a challenge for first-time buyers," added Hale.

The biggest supply increases were in the nation's 50 largest metropolitan markets, where inventory overall was 11 percent higher. The West Coast led the way, with San Jose seeing a 125 percent increase in the number of listings. That is likely because more of these pricey listings are going unsold and piling up.

Sellers are starting to respond by cutting prices. In February, 39 of the 50 largest markets saw an increase in share of price cuts, according to the report. Las Vegas saw the biggest change, a 19 percent jump in the number of sellers slashing their asking prices. That is absolutely due to higher supply.

By the end of January, there were 7,254 single-family homes listed for sale without any sort of offer in Las Vegas. That's up 95 percent from one year ago, according to the Greater Las Vegas Association of Realtors.

Supply nationally, however, differs dramatically by price point. In February, the number of homes priced at or above $750,000, which is close to three times the national median, increased by 11 percent annually, according to Realtor.com.

The opposite is happening at the entry level. The supply of homes priced at $200,000 or below has decreased 7 percent year-over-year, indicating that availability of affordable homes will remain an issue for many potential buyers, especially first-time buyers. The share of first-time buyers fell in January, according to the National Association of Realtors.

"I think the spring housing market will see some signs of a rebound, but it will be slower than expectations, slower than what homebuyer demand would suggest and that's because housing has these structural headwinds that are not going away, even when interest rates are going slower and even as wages are going up. The structural issues are on the supply side," said Nela Richardson, a senior investment strategist at Edward Jones.

The nation's homebuilders are not helping much at the entry level, as they continue to focus on the move-up market. Housing starts and builder permits have shown no major growth and continue to sit at historically low levels, especially given today's high demand from millennials.

"Looking forward, we continue to point to a more mixed set of fundamentals that will likely result in the housing market recovery continuing at the more tepid pace than seen over the last 1 to 2 years, led by job growth remaining positive although decelerating, credit continuing to ease at a modest pace, affordability declining and new home inventory rising," wrote Michael Rehaut, a housing analyst with J.P. Morgan.